What is this emoji Soldiers crap I see on Chromium when I try to put the number One-Four-Five for the latest Realtek Hardware Support Drivers, dammit?
Dernière édition: il y a 3 ans 10 mois par Le Grec.

il y a 3 ans 10 mois - il y a 3 ans 10 mois #625 par Le Grec
Réponse de Le Grec sur le sujet [DRIVERS] Realtek High Definition Audio Codecs (HDA/UAD)
Guys in certain cases if you have no audio, it's Windows 10 1809 fault. Microsoft said they will fix it. Meanwhile if you check on Google there are some workarounds, but since I don't have the issue, didn't pay attention.

By the way, someone asked the diffrerence between HDA and UAD. UAD are Universal and the UI can downloaded from Microsoft Store. Much fewer MBs overall as already mentioned etc.
Dernière édition: il y a 3 ans 10 mois par Le Grec.

so could you please tell me the exact procedure and where to download from the latest version of files needed for my GL702VMK laptop....

by the way sorry, as I'm completely newbie on this..

and Thanks much much again.

I am sorry for not responding sooner because I am still recovering from a fever & sore throat.

I am not updating any Realtek audio drivers on my computers to 8549 and will wait for any 8550+ HDA drivers to become available.


aww, then wish you a fast recovery and Thanks again to you all who are involved in helping others ..
Dernière édition: il y a 3 ans 10 mois par audi0.

COM_KUNENA_USER_PROFILE_BUTTON_LABEL_SHOW_LESS Plus d'informations
il y a 3 ans 10 mois - il y a 3 ans 10 mois #628 par audi0
Réponse de audi0 sur le sujet [DRIVERS] Realtek High Definition Audio Codecs (HDA/UAD)
so finally, I've been able to get the installation folder for 8551_FF03_PG468_Win10_RS1_RS2_RS3_RS4_Win7_WHQL ready by the directions that alanfox2000 provided and then pursued to update afterward and after confirming 2 restart prompts {one after another-- which was required for the installation process to be completed..} and returning to Windows I went to Windows Control Panel but there was no sign of Realtek Audio Manager to be found in there or anywhere else ..


by the way, I checked the Device Manager on Windows and saw that I have 4 entries listed either as sound or audio devices.. 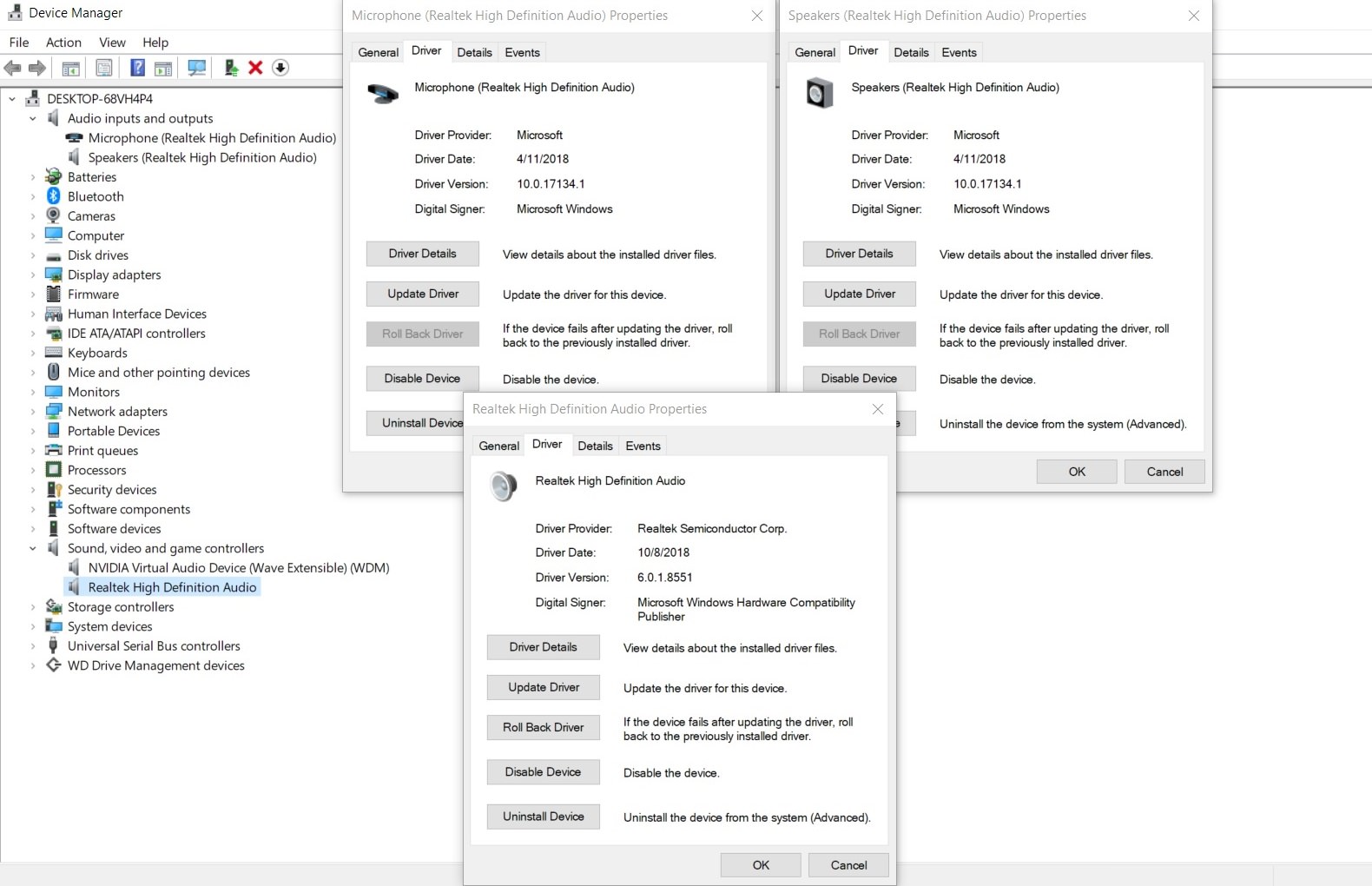 and as the screenshot shows, the driver properties of the ones at the top, listed under "Audio inputs and outputs" do not indicate the correct driver version but the one listed under "Sound, video and game controllers" shows 6.0.1.8551 as it should..

also as it can be seen, there's another device entry listed under "Sound, video and game controllers" named "NVIDIA Virtual Audio Device (Wave Extensible) (WDM)" which I have no knowledge of....
Dernière édition: il y a 3 ans 10 mois par audi0.